The influence of straw on your composting process

Introduction
Straw, horse manure and hay are the raw materials that have the most influence on the mushroom production process. Its structure affects the composting process. Its fibers (i.e. celluloses,
hemicelluloses and lignin) are important carbon sources. The mycelium needs hemicelluloses and lignin for growth during the spawn run and case run phases (vegetative phase). In the so-called generative phase, from pin outgrow to mature mushrooms, celluloses and hemicelluloses are needed. Mushroom substrate has to undergo certain process steps. For the phase I composting process these are the so-called biological and chemical steps. During the phase II process the conversion of ammonia and the creation of selectivity make up the next step. During the phase III composting process the final step is mycelium development. Straw (or horse manure, hay) has a big impact on all these process steps. 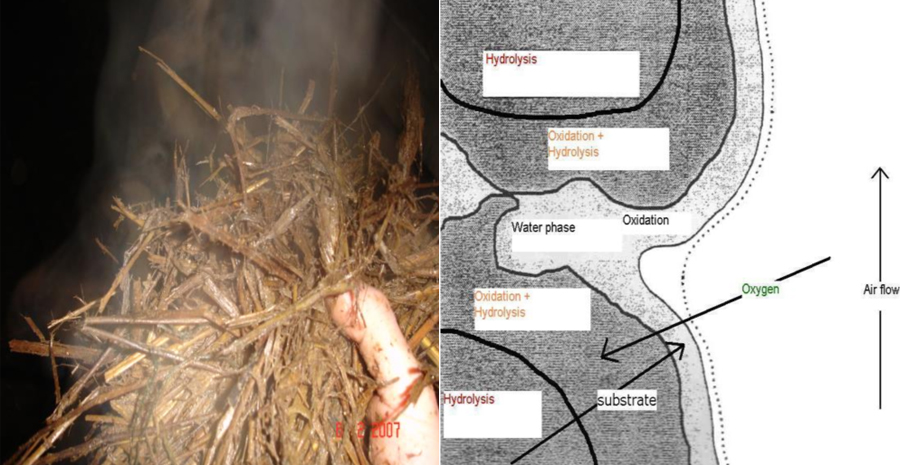 On the surface of straw and chicken manure particles (high oxygen levels), oxidation of the hydrolysis and fermentation substances takes place. It is important that there is a balance between the released an oxidized substances. When there are more fermentation substances created than converted by oxidation, your substrate will go anaerobic. Often this situation arises when there is too much free water and/or when there is a poor compost structure. When your substrate is too dry and/or when the water has not been absorbed inside the straw particles, the hydrolyses and fermentation process will be reduced and your pre-wet process is only partly completed. If the process is balanced the compost temperature rises to 70 °C and ammonia is formed (i.e. ammonification process). Ammonia formation occurs at a correct C/N ratio, moisture content and at a temperature between 45 and 70 °C.  Now your substrate is ready for the chemical step of the phase I process.
During the chemical part of the composting process, straw cell structures are cracked. This is caused by the high pH and high ammonia levels. Ammonia enhances Maillard reactions and forms the lignin-nitrogen complex in your substrate. The high temperature stimulates the browning. Everything together forms the foundation for a selective and high-productive mushroom substrate.
Keep in mind that every time you turn the compost, it will go through another biological process. In winter periods this biological process is more intense compared to summer periods. The cooling of the substrate while turning is less during warmer periods.

The duration of pre-wetting, the duration of high temperatures, and the number of turns in the phase I process depend on various aspects. These are:

Aerobic and anaerobic mesophilic and thermophilic bacteria are very active during pre-wetting when the temperature lies between 40 and 70 °C. Bacteria are more active in case water is freely available. This is the case at the beginning of the composting process. During the phase II process the early stage aerobic bacteria are active. Once the compost free surface water is gone and ammonia levels are lower, thermophilic actinomycetes and fungi start to develop. Both of them are needed in order to make the compost selective for mycelium. During the phase III process the mycelium grows from the spawn into the compost. First the mycelium uses the available starch and proteins in the grain. From there it grows onto the surface of the compost particles. These particles consist of protein and dead/inactive microbes. From the colonized surface the mycelium tips will grow slowly inside the straw cells. Too wet or not well pre-wetted compost impedes the growth intensity of mycelium.

What is structure?
The following factors should be checked when you analyze the straw structure: The abovementioned factors largely determine how the structure is maintained during the composting process.

Variety and climate
Wetter and cooler climates tend to produce more voluminous and longer straw compared to hot and dry climates. Irrigated straw in a dry climate is long, tough and very difficult to dewax and pre-wet. Usually wheat straw is shorter compared to barley and rye straw. Barley straw is long but soft. Barley straw tends to form balls in the mixing process in case one is not using adequate mixing equipment. These balls of straw do not compost correctly. Sometimes oat straw is used. I do not recommend using it, because it is difficult to compost. The best straw for composting purposes is wheat and rye.

Growing season
The growing season, especially during springtime when the straw biomass develops, determines both straw length and strength. During hot summers more lignin is formed compared to milder/cooler summers.

Type of straw bales
Straw baled during very sunny and hot weather will be more brittle. The baling itself has a big impact on both straw structure and the number of fine particles. Nowadays heavier bales are produced in order to save on transportation costs. Heavier bales mean more compression and more compression means flatter and more shattered straw. Round bales leave the straw longer than square bales. Nowadays fewer round bales are used because the handling is more difficult. Composters who dunk their bales during the pre-wetting process should keep in mind that compacted straw bales are more difficult to wet. The same applies to straw that has been baled during dry and sunny weather. Longer or double dunking (i.e. wetting) can help you improve your pre-wetting process. The best straw for composting purposes is straw that is baled dry (less than 15% moisture content), baled tight and which looks a bit dull.

Storage of the straw
When straw is harvested dry, baled and stacked well, it can be stored easily for more than a year. In a very good straw year you often see that straw, stored  for 6 to up to 16 months, composts well and gives good mushroom yields. It is very important to have a good system in place for managing the straw storage in the field. It is important to know what type of straw is stored where. This makes it easier to make and stick to a consistent straw blend. This is the first step in making a consistent mushroom substrate.

Matrix between lignin, celluloses and hemicelluloses and water absorption/ structure
These three structural fibers have an impact on straw structure and straw toughness. When changing from old to new season straw, one can often see that the hemicelluloses, nitrogen and moisture content shows only minor deviations. But, once you look to the composting process, sometimes relative big steps need to be taken in order to make a productive substrate. I have always wondered what else besides fiber content might impact this topic. Can the straw cell size be smaller or bigger? Can celluloses be more complex? Is the lignin more difficult to break down?

The so called crystallinity Index of celluloses (C.I.) is seen as an important analysis tool for straw that is used for cattle feed or bioethanol purposes.  Can the C.I. index  indicate how easy the mycelium breaks down the celluloses during first, second and third flush?

Can the ratio of lignin building blocks Synapyl alcohol (S), Conferyl alcohol (G), and Coumaryl alcohol (H) have an impact on how straw maintains its structure during composting and growing? Or does it influence how water is absorbed? Does it influence how celluloses becomes available for mushroom outgrow? Or does the thickness of the epidermis and cuticle of straw have an impact on water absorption and the composting process? After all these years we still do not know exactly how the process of mycelium growth and  mushroom development works. 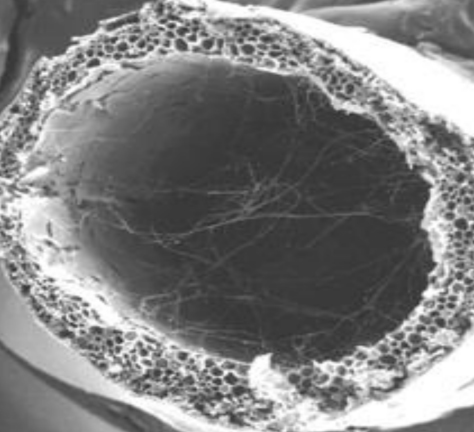 Practical information concerning straw handling
Managing and knowing your straw is the first step in making a consistent and productive mushroom substrate. In the field I work with some sort of check list which helps me determine the straw quality throughout a season. It also tells me how and when I need to adjust the composting process. As you now understand, I focus particularly on moisture, nitrogen, total process time, and the movement of compost during the process. Good indicators on how your new straw behaves during the composting process are nitrogen content, NH4 levels during the phase I and phase II processes, moisture losses, and bulk density. Every compost yard is different. That is why it is important to have your own KPI’s for making the best compost. Accurate and clear KPI’s make it easier for you to focus while having straw changes. This will make the transition smoother.