In 1933, Raymon Mas, the Spanish Consul, started the first Australian commercial mushroom farm in a disused railway tunnel adjacent to Sydney’s Circular Quay.  Mas propagated his own spawn and had a major hand in promoting the burgeoning mushroom industry in the Hawkesbury region, to the west of Sydney.  Starting in the late 1930s, mushrooms were grown in ridge beds during the cooler months; in Europe ridge beds were commonly used for mushroom production but always indoor.  Australia was peculiar in this respect as initially the ridge beds were all outdoors, taking advantage of the relatively warmer autumn and winter months.  Compost based primarily on stable bedding and animal manure was hand turned; loamy soil from between the ridges or won from the edges of creeks was used for casing, with straw and hessian sacking used to protect the ridges from the elements until picking.  To meet the increase in demand for canned and fresh mushrooms post World War Two, the number of ridge beds increased; an influx of migrants from war torn Europe were employed in the mushroom industry and several of the more entrepreneurial immigrants purchased land and started their own farms. These were men and women who were not afraid of hard work and having a go. The early 60s heralded the movement from outdoor ridge beds to indoors; followed by the adoption of the American Double growing system and the start of proper pasteurisation of compost; even today these old disused and repurposed rooms can still be spotted during a tour of the Hawkesbury district. 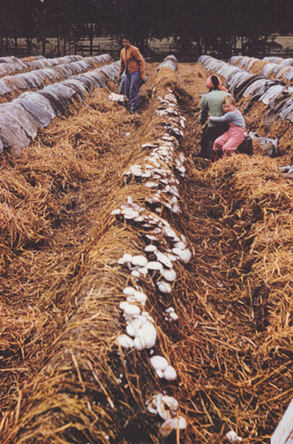 Australian mushroom growers are an innovative bunch and embraced all the new technological advances as they became available.  They were adopters of the Sinden-Hauser short composting method and the associated wooden tray growing systems. There are still growers here in Australia using wooden and metal trays, albeit filled with Phase 3 compost; with of course the notable exception of Costa Mushroom’s Mernda farm, north of Melbourne and the largest in Australia, which still uses wooden tray peak heat rooms in the traditional manner.  The first Dutch shelf farm in Australia was built in the Hawkesbury in 1984 and up until the late 2000s was still pasteurising Phase 1 compost on shelves, latterly moving to filling Phase 3 compost before its recent closure.  Other than smaller operations growing on Phase 3 blocks, the most recently constructed farms in Australia are based on the Dutch shelf system.

Under Aerated Composting – The Australian Influence

Australian and New Zealand compost yards came under environmental pressures from odours in the 1980s, a little earlier in the piece than European operators and consequently ‘down-under’ compost makers had a major influence upon the development of under aerated Phase 1 composting systems.  Whilst readers can be forgiven for thinking that the under-aerated bunker composting system is a Dutch innovation, it should be remembered that the first under-aerated Phase 1 bunker was constructed in 1948, by Andre Sarazin in Northern France, and the real under aeration pioneers, in the 1970s and 80s, were the Italian’s Francescutti and Derks, who trialled Phase 1 in Phase 2 slatted floor tunnels.  Australian compost makers were ‘first off the mark’ in visiting Francescutti’s Agrifung operation in northern Italy and ideas gleaned from this composting facility formed the basis for subsequent developments in Australia and New Zealand.

Although CNC in the Netherlands subsequently adopted modified Phase 2 slatted floor tunnels for their horse-manure based Phase 1 composting process on the Francescutti model, in Australia, with its hard wheaten-straw based compost, a different approach was deemed necessary.  The very first high pressure under aerated floor Phase 1 system was designed and built in 1989 by Rob Tolson at his Elf Mulgrave operation; a high pressure backward curved centrifical fan supplied air to the compost by means of 15 mm holes drilled through the concrete on a 400mm x 400mm matrix into a system of buried 160 mm pipes.  The Phase 1 compost produced on the aerated floor was of excellent quality.  A plastic nozzle, which could be glued onto 160 mm pvc pipes, was subsequently designed; the considerable cost of development and manufacture of the extrusion moulding was borne by Elf and three other composting operations.  The ‘Air Down Under’ spigot floor system of composting was born!
In April 1990, a three-day joint AMGA/ISMS International Workshop-Seminar on Agaricus Compost was held at the University of Western Sydney, Hawkesbury campus.  The attendees at the workshop were a World class group of leading compost makers and researchers.  The high pressure under aerated spigot floor Phase 1 bunker system was adopted by compost makers Worldwide; it is still in use largely unchanged today and has subsequently been modified for use in Phase 2 and 3 tunnels, a truly Australian innovation. 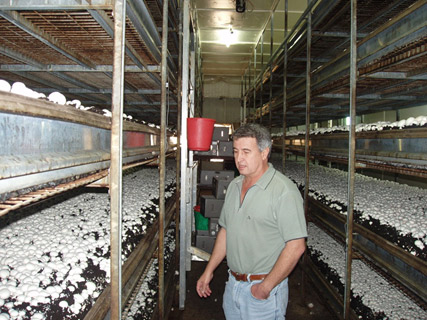 In 2002, because of difficulties met with collecting the voluntary spawn levy from all growers, a statutory spawn levy mandated by the Federal Government was introduced.  This included an element for research and development (R&D), which attracts a dollar-for-dollar contribution by Government.  After the introduction of the statutory levy, the AMGA still managed both R&D and Marketing up until 2014, when a change in legislation meant that the management of funds was switched exclusively to a Horticultural Research and Development Corporation.  Up until then the AMGA’s focus was very much one of mushroom promotions to drive sales at the retail level and in food service emphasising the health message; a switch to a brand awareness message focussing on versatility and taste has not had the desired result and annual mushroom consumption has fallen away from the peak of above 3.0  Kg per capita reached at the end of the 2000s down to the current 2.78 Kg per capita level, this despite a marketing investment of AUD 3.34 million in 2020/21.  Annual mushroom production peaked at 72 000 tonnes in 2018/19, falling to 68,800 tonnes in 2019/20, with the total for 2020/21 at a similar level; the pandemic and protracted lockdowns have severely impacted food service sector mushroom sales, partially off-set by higher retail sales as more households have embraced home cooking.

In common with most western countries, the Australian mushroom industry has undergone a major consolidation over the last three decades.  Despite an almost doubling in the production of fresh mushrooms from the early 1990s the number of growers has fallen from well over 100 to 45.  Larger producers have grown by the acquisition of farms and the expansion of existing facilities or both, whilst smaller aging operations have fallen by the wayside as the escalating cost structure of the industry has rendered such businesses unviable. The three major players now control over 80% of the market, primarily supplying the retail chains.  There are several medium sized farms, who supply both retail and wholesale markets; the remaining small operations command retail prices supplying niche markets such as coastal resorts, or farmers’ markets in the larger centres.

There are farms in every State and Territory of Australia, except for the Northern Territory and now Tasmania; the large and medium sized operations are well represented close to the major capital cities.  What has been more amazing is that over a period of thirty years, the industry has moved from a situation where individual farms without exception conducted their own Phase 2 process in wooden tray peak heats or bulk tunnels using Phase 1 compost made on site or bought in from a larger composting operation to farms which are exclusively supplied with Phase 3 compost, either in bulk or for the smaller operators in blocks.  Indeed, in Australia there are now only eleven Phase 1 yards remaining: with five of those supplying Phase 3 compost to the farms without composting capabilities.

The Australian mushroom industry, in common with other countries is facing difficulties in recruiting and keeping pickers; this is despite the minimum casual picking rate, set by the Horticultural Award Scheme, of AUD 24.36 (EUR 15.43) per hour; that has to be one of the most generous rates in the world.  The inability to recruit sufficient labour to pick mushrooms has now reached a critical situation, exacerbated by the pandemic, such that growers are having to reduce their weekly area laid down.

Other than a few areas of sedge peat in South Australia, which are now protected under environmental legislation, the industry is totally reliant upon imported European casing soil.  The pandemic has had a major impact upon casing shipments, both in terms of shipping costs and protracted transit times, leading to some farms running dangerously low on casing stocks.  Worldwide, peat accounts for almost a third of total carbon storage; so, it is understandable that the environmental spotlight is well and truly focussed on the extraction industry and the use of peat as a fuel.  Whilst in Europe less than 0.05% of the total volume of peat mined is earmarked for mushroom casing, its use is increasingly being caught up in the environmental push to leave this natural carbon sink undisturbed.  It will be interesting to see how this scenario will play out.
Finally, no discussion about the Australian mushroom industry can be complete without mentioning the effect of climate upon the availability of one of the major inputs into the composting process, wheaten straw.  Each year, most compost makers have a ‘nail biting period’ anticipating whether the straw season will be good or bad.  The areas where decent straw can be procured vary from season to season, even a localised thunderstorm falling at a critical cropping stage can make all the difference. 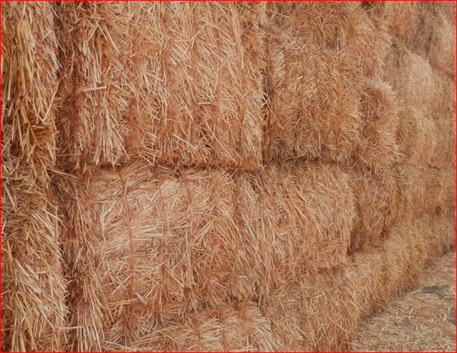 The 2021 wheat season was shaping up to be a good one in the eastern States, until in November the broad acre dryland wheat growing areas had three times the average rainfall in one month; this has led to extensive flooding and high soil moisture contents which will make harvesting difficult if not impossible.  The Bureau of Meteorology has now declared a ‘La Nina’ climate event for Eastern Australia, which means lower temperatures and higher than average rainfall through summer and autumn.  This season comes after several years of drought which has resulted in high straw prices and long hauls to procure sufficient straw for composting. 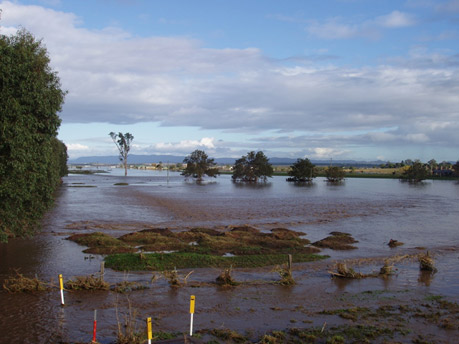 Composters have learned how to manage the process when forced to use ‘harder to breakdown’ irrigated wheaten straw, as well as how to incorporate other alternative carbon sources such as canola straw, maize and soya bean stova, sugar cane bagasse, even rice straw, to have sufficient material to be able to keep operating whilst still producing a potentially high yielding compost.

What will the next decade have in store for the Australian mushroom industry?  Predictions, especially when they involve the future, are notoriously unreliable; one thing is for certain the industry will have to face some major issues, which will invariably lead to a further fall out of smaller growers and more consolidation.